West 39th street was built in the mid 1800’s when old Westport was growing. It’s one of Kansas City’s oldest Districts rich with history. I was happy when fellow neighborhood business White Lights Bookstore took our space. The neighborhood has experienced a lot of change, it was nice to know the space I loved would be appreciated. Multiple buildings have been modified beyond recognition or leveled for redevelopment. Thankfully 1801 still remains the same. The building sits in the center of the business district and the local businesses are what make the area one of our best neighborhoods.

Built in the 1800’s, the building had businesses below and two apartments above that served as living quarters for the owners and families. I was told once those were a mercantile store and a livery, but specifics on shops here before the 1930’s are murky.

We had the upper west loft of the building. The second floor had a “formal” entrance on 39th, the door in between D’Bronx and Blue Koi. There was also a utility entrance on Bell we didn’t use much. Veco’s Italian Restaurant was below us when we first moved in. After many years, they were closing and Blue Koi took their place. Blue Koi is a family related business to Genghis Kahn Mongolian Restaurant, which is around the corner on Bell in the same building. Both restaurants are still there. The owner of Blue Koi is Scott and no matter how busy, he always greeted me by name. Studio 39 and Blue Koi opened around the same time and sometimes I felt like a pesky kid sister upstairs. Buildings that old have quirks, labyrinth like pipes and fuse boxes in weird places. When installing our shampoo bowls the old valve broke off, the plumber and I looked at eachother with “OH NO!” face. “Where’s the main shut off?!” he said, I panicked “I dunno!!” I raced downstairs to warn Scott, there was a waterfall over his brand new, front of the house computer he had just set up. He said “Our main is on the back wall, yours probably is too!” I ran back up and found it. When checking out any new space I now locate the power & water main FIRST.

That section of Kansas City is on the oldest part of the power grid. I only know that because a KCP&L worker told me once during a brownout, and 20 years ago they were common there. Salons are power vacuums, we often blew breakers. It took some sleuthing to figure out we had a random box in Blue Koi’s basement. I would go downstairs and apologetically ask Scott to flip it for me. After awhile, when I entered he’d ask “food or breaker?” If the latter, when busy he’d wave me back to flip it myself. The basement was impeccably clean and organized but I’ve never been a fan of ANY basement, and ours was in one of KC’s oldest buildings. I’d take a deep breath and head down the stairs, eyes on the box, flip the breaker, then bolt back up just in case a ghost from Westport’s past was chasing me. I was old enough to know better but again.. just in case. Back in the cheerful safety of the restaurant I’d give Scott a thumbs up and head back up to our loft. I eventually had our electrical re-done, but Scott was always SO kind. He’d shrug and say “old buildings, we’re all in it together.” We really were. He was so good to us despite my newbie follies I nicknamed him “Great Scott!” When I visit he still greets me in his happy familiar way.

The loft across our hall remained empty the 9 years we were there. It was above D’Bronx Deli and had not been updated or used in decades. We were the only ones with a key to the street entry, so we’d use this space for storage. Both spaces had original architectural features like breeze windows above the doors, original walnut floors, horsehair plaster (indicative of the period) and abalone inlaid tile fireplaces. I’m an architectural nerd and I loved it. Those features made the heat in the summer and stairs worth it.

I have lots of good memories made from moments with other local businesses, but there are two places that will always stand out. One became a Kansas City staple, one became a business of KC past, but both were there before any of us.

I needed a ladder the first week we opened and Johnsons hardware was still across the street. I went in and introduced myself to the older gentleman working. I asked where the screw drivers were, I needed a phillips head. He said “ Oh good, you know your tools! That will help with your shop.” I frequently felt like kid who impulsively opened a business, that small statement was reassuring. He said “Let me get you the size of ladder you’ll need.”  He wrestled a 10 foot ladder to the front and proudly said, “This is a good one, it’s solid wood and made in America.” I felt patriotic just looking at it. He then helped me carry it across the street and up the stairs. I used it countless times. Prospero’s Book Store moved in after they closed. I love that store too, but I later learned the hardware store had been there since the turn of the century. When we moved out of the loft in 2010 I almost left the ladder intentionally. The space in our furnace room where it sat for 9 years seemed made for it. It almost felt wrong to take it, but as I was looking around the space one last time, the mover asked “anything else?” I said “Yeah, I almost forgot my ladder.”

In 2001 D’Bronx was still owned by the original family. All we had to do was go downstairs for quick comfort food and good company.  I had not been to New York yet but would later realize how they built a perfect slice of NYC Heaven in Kansas City. It was always busy, but packed wall to wall at lunch. It was a real deal New York deli, and if you were unfamiliar, it could be a bit intimidating. They yelled out orders when they were ready and if you weren’t paying attention (I often wasn’t) it didn’t go unnoticed. It wasn’t just a place to grab a sandwich, it was an experience they wanted you to be a part of. The deli was owned and operated by a family, a daughter and her husband ran it with her parents who founded it. The older couple were in their 70’s, but were there bright and early every morning. Bubbe (the Grandma) would make me a bowl of matzo soup if I had a cold. Though petite, she was mighty. If I tried to refuse she’d say “no salad today, this is Jewish Penicillin- eat.” If I had a sniffle after that, I would thank her and she’d pat my arm and shoo me off to a booth. To this day it is the best soup I’ve ever had. We loved her. I’m glad I was their neighbor, so glad I met them. When you walked in Bubbe was always behind the counter like she expecting you. D’Bronx has changed ownership and has more locations. It’s still the same delicious quality, but I’d give anything to have a bowl of soup cooked by her today.

*1801 is on the south side of 39th and Bell. The block and building are owned by the Shapiro family. I will always be grateful to them for our time spent in this lovely building. The restaurants and businesses mentioned are Iconic to Kansas City. Another 39th street favorite is Room 39. It opened a couple of years later by a couple that were one of the first to bring the “farm to table” concept to KC. Like Blue Koi and D’Bronx, they now have more than one location. The food at each of these restaurants is amazing, and the bookstores are a must visit! 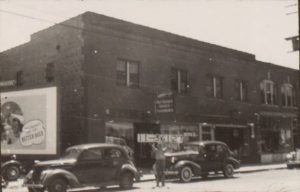 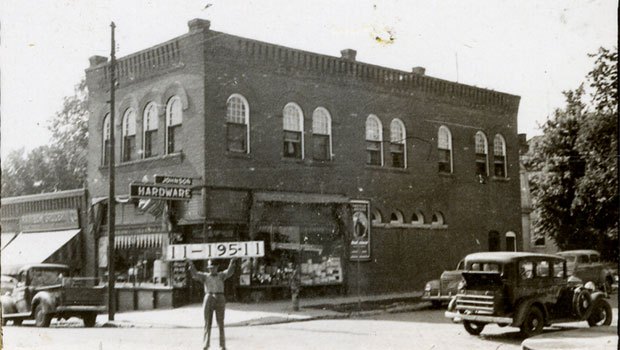 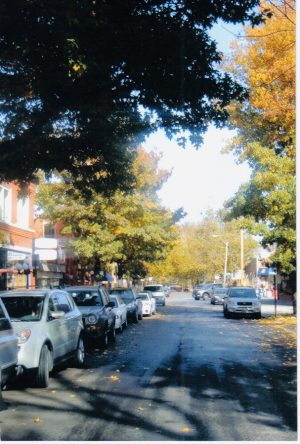 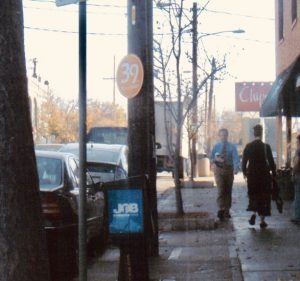 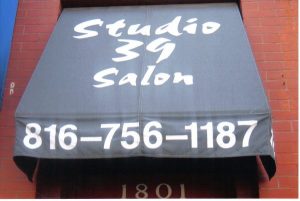 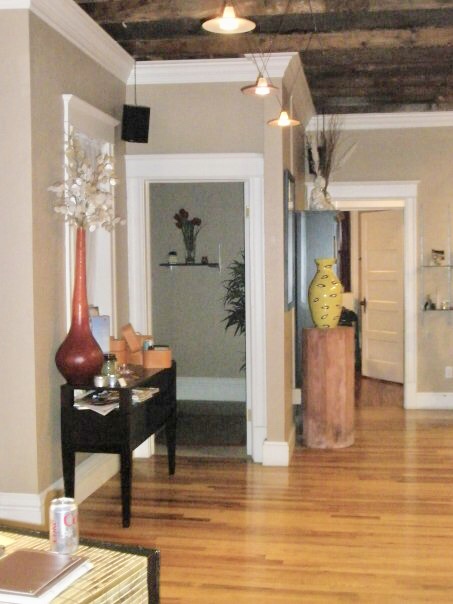 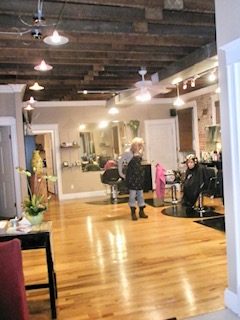 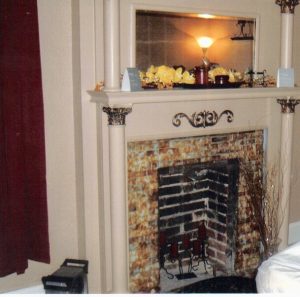 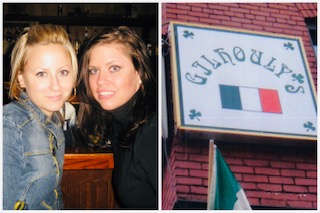 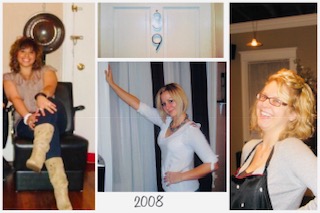 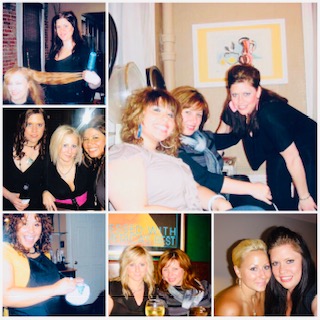