Years ago when I first became certified for hair extensions, the world of salon hair extensions was very different. At that time there were only a few salons in Kansas City offering them. Now it seems every salon offers some sort of hair extension. It has been quite awhile since I’ve addressed hair extensions. So much has changed in the last several years I wanted to post about extensions. This post will be a brief overview of some facts (some scary) and terms that can be confusing.

Since 2014 tape hair extensions have exploded on the scene making every stylist that performs extensions an “extensionist.” Even as I type this, spellchecker is underlining it because it’s not a real word! This makes me laugh. Confession: years ago I made this up because it sounded good for my bio. I was the only one with this self created & self-given term. I literally just made it up to describe “a stylist who specializes in extensions”, because I didn’t want to type all that! Now I see it everywhere on local competitor salon bios🤣 ! “Master Extensionist.” What is that really? Read facts and thoughts on the “Master” anything epidemic.

I’ve found that new clients are just as confused as they were years ago when there was much less information available. Now the web is saturated with videos and info and no one is any more informed than they were years ago, because much of it is opinion or brand biased.. at the very least. Every method seems to be “the best”, every hair type “the best” and consumers don’t know where to turn. On top of that, you can purchase them yourself on eBay or Amazon and there are YouTube video’s showing you how to DIY.

Why go to a salon for hair extensions?

For those of you thinking about attempting this, let me just say this. If my child gets a scrape on his knee I can certainly spray it with bactine, but that doesn’t mean I’m confident enough to stitch it myself. Perhaps this is an extreme example, but you get my drift. Hair extensions are “hair plastic surgery” and should never be attempted at home. I’ve seen some real situations from DIY extensions. If you’ve had success doing them, good. You’re lucky and the rare exception. Generally speaking just remember YouTube girls have nothing to lose and want to make $$. You do have something to lose- your hair!

The Basics of Hair Extensions 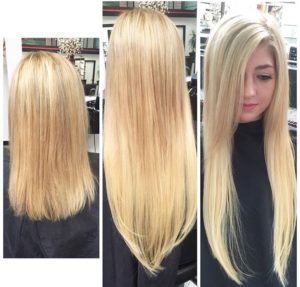 Salons typically partner with reputable companies that are only using real human hair. A startling fact, even 10 years ago yak hair (as in water buffalo) was commonly used in lower end hair extensions. It still is. If you know what’s it called you can avoid it. It has many different terms. In the manufacturers mind it is real hair; real yak hair. It wasn’t synthetic and it came from a mammal. Even though this is misleading, technically no lie was being told. That was 10 years ago. The hair extension demand has quadrupled in just the last 5 years driving the demand for quality human hair extensions through the roof. This in turn drives up the prices which also drives up sketchy behavior. The extension industry, both professional and non professional, is a multi billion dollar industry. Different type’s of hair have changed through the years. ‘Remy’ is a term thrown all around. Keep in mind that most of the hair extension production come from China, Pakistan, India and so on. Countries where there are no loose advertising regulations. This fact combined with heavy importing to the largest world Market (the U.S.) which also doesn’t regulate this booming industry, is a catastrophe waiting to happen. I am surprised after many years of watching the industry grow, there are still no minimum regulatory requirements. We have seen firsthand severe matting caused from poor quality hair extensions. We have had clients come to us to have them cut out their hair!

The benefit of having this service done with a professional stylist is that they are more than likely trained for this service. Let’s hope anyways. They should be trained with a salon exclusive extension company. Not a company that targets non- professionals. The companies that target non salon industry consumer should be avoided or at least handled with caution. They know you are  a click and pay consumer who isn’t going to ask the right questions because your professional reputation isn’t on the line, unlike a stylist or salon owner. So this is post to help inform you about industry terms to help educate you about this. Don’t forget- people falsely advertise all the time! Just because something says “human hair” doesn’t mean its 100% human hair. There may be human hair blended with synthetics or animal hair that has been chemically treated to resemble human hair. Technically as long as it has some human hair in the package they can still get away with it legally. Even if they say this and you discover it to be untrue by testing the hair (do you really have the equipment to do so or the knowledge to do it properly) will you really take the time to sue this faceless and nameless seller on eBay? No! They know that. So here is a small glossary of terms that may help you, but don’t get too caught up on these either. They are often also overused. 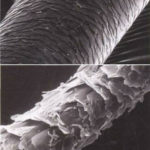 I hear this all the time” Are your hair extensions Remy? Clients often ask this without knowing exactly what it means. Lots of stylists don’t even really know. This is an insider term originally used years ago to separate good and bad hair extensions, basically the quality. If you’re getting your hair extensions in the salon the answer is always yes- or again it should be. Some salons just run down to the local wig shop and buy whatever they think is good. Those public beauty supply places do sell all types of hair, good and bad. If a stylist is uneducated on this- they may purchase non Remy hair, even if they ask. Remember a lot of hair says it is, even if it’s untrue. False advertisement is a real thing in the unregulated world of extensions. I mean where does the hair REALLY come from? That’s a whole other post but Remy simply means the cuticle of the hair shaft is still intact and it’s a healthy cuticle, running the same direction.

A tape hair extension is a method of hair extension placed in hair by sandwiching client’s hair between two extensions that are attached by an adhesive that resembles tape. We have seen some real at home nightmares with these since they have gained popularity because they look easy. What if you get cross hairs, what if you get a mat, or what do you do if you want them out and they are really stuck in your hair and you try everything to get them out and they are just a big greasy matted mess? Clearly my vivid descriptions indicate we have seen this scenario as well. Really, don’t try this at home.

This simply means this is an extension that is attached by a no heat application. Tapes are an example. For single strand there are methods like like compression extensions, also called cold fusion. Don’t be fooled into thinking no heat means no damage. I’ve seen instances where locks have caused friction on some clients hair and caused hair breakage. Or situations where clients have simply waited too long to get an adjustment and the hair mat above the extensions were horrible and caused hours of labor from the stylist simply trying to comb out the mats with as little damage as possible. Sometimes the lock doesn’t give when pressure was applied and it simply ripped the hair out, extension and all. Hair extensions are not 100% damage free. This is mainly determined by individual care and how long they are worn. So the term “no heat” means just that. There are risks with all extensions.

This is a traditional method that originated in African American salons. It is the original way to wear extensions. So thank you to these salons for pioneering hair fusion for us because if they hadn’t, it wouldn’t be so main stream. Sew in’s are where the client’s hair is braided in horizontal tiny braids and wefts or “weaves” of hair (that is hair sewn in a track seam that hangs like a big hair curtain) is sewn in the tiny braids. This has become popular with Caucasian women and we have seen some bad results. This method, in my opinion, is typically not good for most Caucasian hair. Here’s why: African American hair naturally has a hard glassy finish that Caucasian hair does not. Simply put- it’s stronger.  African American hair despite it’s strength can still be be pulled out or have hair loss and breakage from this method, it’s called traction alopecia. If you have fine or thin hair and choose this method, don’t wear them long term! You will, without a doubt, lose hair over time. BTW, there is a great documentary Chris Rock did that touches on this called Good Hair. I recommend watching.

We have a saying here, “there’s a type of extension for every type of client.” You have to be advised by someone who is in the know about multiple types. Not one type or one brand. We aren’t brand exclusive with anything because we use what works, and don’t believe in a one size fits all approach, especially for hair! If you’re shopping for hair extensions, contact us and book an appointment and we will lay out all your options for you. Generally salons don’t have the resources or money to carry inventory on extensions because they are so expensive but this is one of our specialties so we always have some stock. 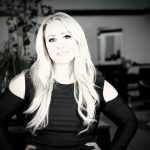